This analysis was created by Rand Rowlands

College management generally claims they have no more money.  They claim that governments need to give them more to work with.

They also claim that the majority of their expenses are salaries and are fixed; implying perhaps that it is greedy professors who create the cost burden.  Yet management salaries, and indeed, the total costs of administering a college, seems to rise faster than professor salaries.  And at least professors and counsellors supply direct service to the paying customers, the students.

How can we square this circle?  Time for some Financial Analysis from someone who has done a lot of it in his life for some major corporations.

Let’s start with revenues.  Now I have to admit I have never been able to quite get my numbers to match up with the college’s numbers.  I’m going to use the number of full time equivalents quoted by put college President Anne Sado at the start of the 2014 term and say there are 22,000 full time equivalent students, roughly a 5% increase over the prior year.  The average domestic tuition for a full year is $3,500 as of 2014.

Multiplying the two gives us a low-end estimate of tuition revenue of $77,000,000.  My guess is that our international student body is increasing by more than our domestic student body, and we know they pay about three times as much (or more) as domestic students to offset the lack of direct government funding to the colleges.  But let’s use $77,000,000 as a low-end estimate, and do a sanity check.

On the Canada Revenue Agency website, non-profit organizations are required to show their financial information on Schedule 6.  Here is the link for George Brown’s March 2013 fiscal year.  It shows total revenue of $291,781,972 of which $136,366,023 is from the sale of goods and services.  I’m not off by just a little.  I’m off by a boatload of cash.  Nonetheless, I’m going to use the bargain basement number of $77,000,000 to show the very lowest end of the scale.

Now, we know that tuition is going up.  As of September 23, 2014, tuition in Ontario was estimated by Statistics Canada to rise on an annual basis about 4%.  By 2018, it is expected to continue to rise at this rate according to a CBC report.  Also, instead of a 5% growth rate calculated above, let’s use the long-term expected growth rate of the GTA:  1.4%.

Now for some math.  Let’s see how much the college’s revenues will grow over the next five years at the very minimum even with government funding frozen.

Based on actual tuition revenue, a more reasonable estimate is:

In other words, at a minimum, revenue at George Brown College is growing at a compounded rate of 1.6% per year, each year, and more likely at 2.7%.

Just for fun, because this is fun for me and I don’t get out much, let’s see what happens when we do use a 5% enrolment growth.

Annual revenue would then grow at a compounding annual rate of 4.7% each year for the next five years.

At George Brown College, there does not appear to be a revenue problem.  Maybe I need to look at costs.

SCREECH (the sound of a needle across a record).

Here’s the same information in graph form.  I did not show the Best Guess projection since it overlaps the actual results too closely, which makes the graph messy. 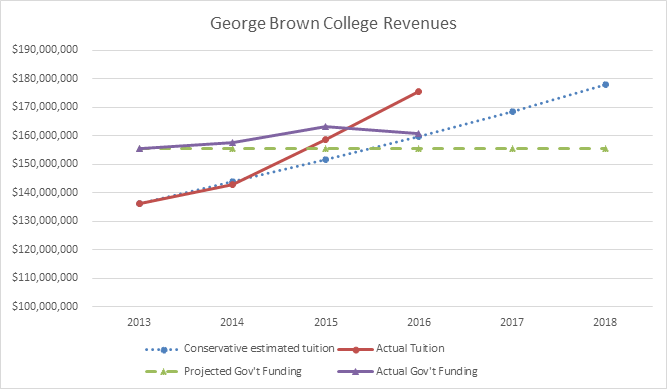 Actual revenues seem to be tracking to the best guess of annual tuition increases of 4% and enrolment growth of 5%.  Even though government funding is flat, tuition growth dominates.

Just to clarify, this does not mean that every tuition is increasing by 4%.  There may be a customer mix issue here. We know that across Canada, international students have increased as a percentage of all students from 7% to 11% over the period 2004/2005 to 2013/2014.  Their growth is four times that of domestic students.

Assuming that the 4% rate is the correct weighted average annual tuition increase, then we can create a model reflecting this rate where domestic students have their tuition only growing at 2%.  If nine year’s ago, international students paid three times the domestic rate, then an annual rate increase of 6% coupled with their greater percentage of post-secondary enrolments would satisfy the criteria of a weighted average tuition increase of 4% annually.  Given this scenario, international students would now be paying 4.25 times the domestic tuition compared to 3 times, nine years previous.

This is only one set of data that satisfies the criteria.  Detailed research may be able to lock some of the pieces in place, but as it is, the equations are relations not functions.  There are still too many unknowns.  It is noteworthy though that as the percentsge of international students increases, the growth in weighted average tuition accelerates.

What can upset this rosy apple cart? Government could cut funding, not just keep it steady, but that seems unlikely.

Demand for college education could fall.  That also seems unlikely within the next five years.  Our student demographic reflects the average population more closely than universities, and the average person is not a self-directed learner.  Given the lower thresholds for entry and exit, colleges also have an advantage attracting mature students who want to get practical job skills to move up in their career.  Long before Ontario colleges need to worry, small universities will begin to suffer due to online learning opportunities.

Perhaps the greater threat comes from our greatest asset right now – the increasing number of international students.  As developing countries develop their own post-secondary institutions, opportunities at home may begin to outweigh those overseas.  There is also the possibility of a nation or state undercutting prices to lure international students to a different destination.

We need to ensure that we do not squander our current windfall.  For that analysis, we need to look at costs, which we’ll do in the next article.

Bargaining Team asks for 'No Board Report'